Who won the CY Young Awards this season and what did the vote totals look like? Ditto on the Rookie of the Year awards. Mr. Flowers also breaks down the Qualifying offer by reporting on the two men who accepted and the four who turned it down to become free agents.

Trevor Bauer won the NL Cy Young while Shane Bieber was a unanimous selection for the AL award. Here are the results. I will have more on both awards, including my full thoughts, in this weekend’s Saturday podcast. I will also discuss the results of the NL and AL polls that are currently running.

Here are all of his punchouts if you are in to that kinda thing.

ROOKIE OF THE YEAR WINNERS

In the AL, Kyle Lewis was a unanimous winner. I don’t agree with that call and will go into in on the Saturday podcast. In the NL, Devin Williams won the award.

Here is how the Qualifying Offer situation played out with a quick hit on each man.

He had no choice but to accept, right? He will double his 2019 salary and get a chance to keep the good times going with the team that helped him to resurrect his career. Last season he went just 3-3, but he posted a 3.62 ERA and 1.11 WHIP over 59.2 innings. Oh yeah, I left out the best part. Gausman struck out 79 batters for a massive 11.92 K/9 rate. Special thanks goes to his dominant splitter that batters hit .092 against in 76 at-bats. Is that number more absurd than the .246 OPS on the pitch? You decide. He’s only thrown 162 innings the past two seasons, and his shoulder has been barking for years, but the Giants will welcome back the righty as part of their rotation in 2021.

Don’t you wish that your parents pushed you to continue your athletic career when you gave it up to study history, math or science? Of course, few of us can thrown 80 mph, let alone 90, but I’m here to tell ya that if your child can sling it, keep him in the game. Stroman didn’t throw a pitch last season as he chose to bow out cause of Covid. Not one pitch he threw in 2020 counted. His reward is $18.9 million, or more than anyone reading this article will make in their entire life. Stroman ain’t no ace, but he is a strong depth option who usually produces innings, a decent set of ratios, and tons of grounders. He posted a 2.06 GB/FB ratio in 2019, an excellent mark that was more than half a point below his career rate. In fact, the mark had been at least 2.95 the previous four seasons, making him one of the top-3 ground ball producers among starting pitchers in baseball.

The NL Cy Young winner has previously said he would sign 1-year contracts the rest of his career. Turns out that may not e the case as he’s considering all kinds of deals after his most successful season. As quick as he is with a fastball, he might be quicker with a comment. Never shy to express his opinion, some teams will likely be turned off by his willingness to question everything. Others might be turned off by the fact that nine big league seasons with an ERA above 4.15 seven times. He had a dynamic 2020, but everyone knows that 0.79 WHIP was so stupid good that he has no shot at replicating it (career 1.22, previous best 1.09). He performed at elite levels in 2020, but is he an elite pitcher? Despite the Cy Young vote, that might be an open question when it comes to writing a check for his services.

The oldest buy on this list, DJ is 32 years old and turns 33 next July. Over the last two years with the Yankees he’s played second base 112 times, third base 53 times and first base 51 times. That type of versatility is what every team in 2021 baseball is looking for. In 195 games with the Yankees he was – dynamic hitting .336/.386/.536 for a .922 OPS. He always had batting average, but he added power with the Yankees hitting 36 homers in those 195 games. His versatility, and his bat, suggest a big time payday is coming for the artist formerly known as a professional hitter. He’s more than that at this point and he’s hitting free agency at a perfect time given his performance. We will see if the state of the world crushes his expectations or if he will still get paid for his damn impressive work.

I spoke in detail about Realmuto’s prospects in the podcast listed above. How much change will a team throw at a catcher who is set to be 30 years old on Opening Day 2021? The last five years there hasn’t been a better offensive catcher in baseball, and he plays as many games as anyone at the position as well. He can slot in at first base or designated hitter to keep the bat in the lineup the days that his legs get a rest from catching, but the huge value in his offense is having it come from behind the dish. His age, and the economics of the game at present, make him the most fascinating case on the board this year.

It will seem odd to have him wearing another jersey this season, but it sounds like he is ready to move on. From 2016-19, Springer was one of the more productive non-elite players at his position. His average effort in those four years was .274-31-84-106-6… and that was with him playing an average of just 141 games a season. Toss in a .363 OBP and .496 SLG an you can easily see how much value he brings to a club. In 2020, in just 51 games played, he was as good as ever with 14 homers, 32 RBI, 37 runs, a .359 OBP and .540 SLG. Springer is now 31 years old, and that could make getting a five-year deal difficult with the new cost cutting measures teams seem to be wanting to employ. That said, if a team is looking for a power bat in the outfield, and a guy who can be a table setter for an offense, there aren’t going to be any better options out there this season than Springer. 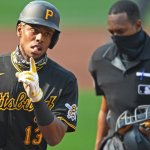