Not every team is at 81 games played, most haven’t actually, but we’re taking the holiday as a sign that it’s a great time to have a discussion about pace and what the season would look like if you did the unscientific, and wholly unreliable, doubling of stats. Yep, we know that isn’t how it works, you can’t just say “double his production to date and that’s what you get in the second half” but it still might be illuminating to look at some players if we do that, so that is exactly what we will do in what follows. I’m doubling all the numbers, assuming the exact same pace in the second half… so here we go.

1: The number of hurlers on pace for 20 loses – Patrick Corbin.

2: The number of hurlers on pace for 20 wins – Gonsolin/Verlander.

3: The number of hurlers on pace to lead the league with 18 hit-by-pitch – Fried/McKenzie/Pivetta.

22: The number of relievers on pace for 20 saves. That list includes Corey Knebel, Mark Melancon, Tanner Rainey, Dany Jimenez, all of which seem unlikely to get there.

Jose Berrios is on pace to allow a league worst 34 homers. He allowed only 22 homers last season and has never permitted more than 26 previously.

Mookie Betts has been hurt and is only on pace for 12 steals while batting .278. He’s also on pace for 34 homers and 110 runs. His pace is actually well beyond any of that though as he’s played just 61 games. Wow is right.

Shane Bieber is on pace for six victories in 180 innings. The last time he threw 180 innings he won 15 games.

Jake Cronenworth is on pace for 100 runs scored.

Josh Hader has never had 40 saves. He’s on pace for 50 this season.

Ke’Bryan Hayes is on pace to steal 18 bases with… six homers.

Jordan Montgomery is on pace for six wins. He has just nine wins in 46 starts, which is pretty remarkable for a Yankee hurler with has a 3.60 ERA and 1.19 WHIP in that time.

Martin Perez has a 2.34 ERA this season. That mark is less than half the 5.05 mark he posted the last five campaigns.

Taylor Rogers has a career best of 30 saves. He’s on pace to up that mark by fifty percent this season with a pace of 46.

Trevor Story has been tremendously uneven this season, zero doubt about that. Adding it all up he’s still on pace to go 20/20 with 104 RBI and 86 runs scored. Ain’t a thing wrong with any of that. He is batting .221 though. Blame the 31 percent K-rate as he’s just not making enough contact at the moment.

Mike Trout is on pace for — zero steals. He has three thefts over 161 games.

You can hear Ray on SiriusXM Fantasy Sports Radio, Channel 87, Wednesdays on the Elite Sports Show with Jeff Mans from 4-6 PM EST (Jeff is on all week, M-F). Ray is also on the Fantasy Drive with Kyle Elfrink Friday nights 10p-12a EST and Saturday/Sunday 7-9 PM EST (both days). 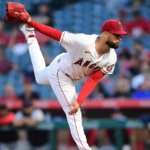