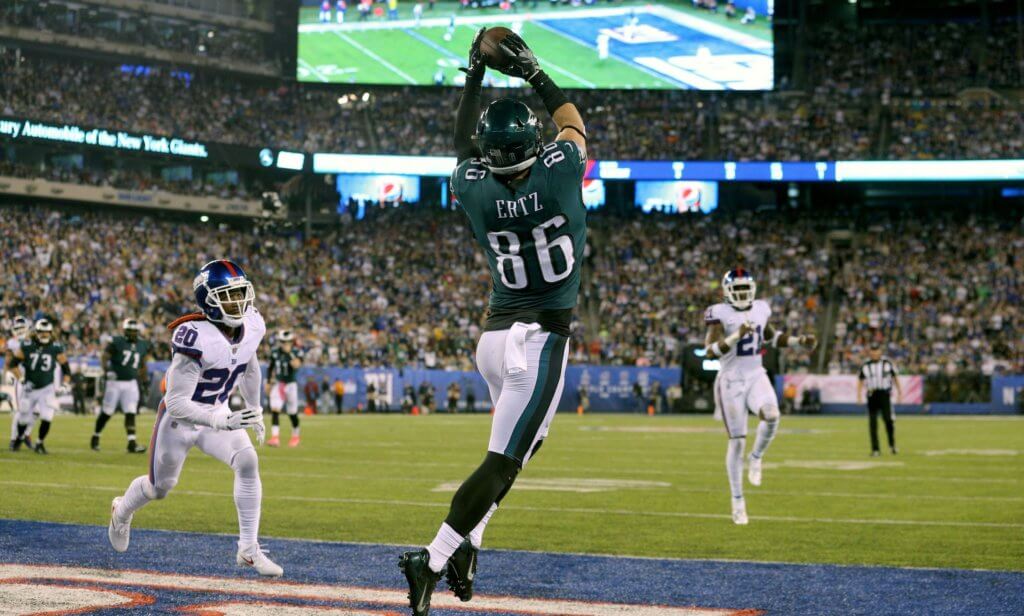 Eleven hosts and a producer from SiriusXM Fantasy Sports Radio recently sat down to do a draft. There were 12-team in the PPR setup, and yours truly had the #2 selection overall. See how the team turned out as well as read a pick-by-pick rundown as I wrote a live diary about how the draft was playing out and detailed why I chose who I did, or didn’t.

*This is a round-by-round diary, in real-time, as I’m drafting, of how I put my team together.

ROUND 1: With the #2 pick overall it is pretty simple for this scribe. I’m grabbing Saquon Barkley. The question of what to do starts in Round 2. Do I go RB there or do I drift to WR? With the way that most drafts have been going, my assumption is that I will probably end up double-tapping at running back, ideally Conner, in Round 2. I will grab my first wideout, and then in Round 4 I will either pivot to tight end – if Andrew/Ertz are still there – or my second wideout (if I don’t take a wideout in Round 4 it is likely I will grab my second in Round 5).

ROUND 2: Such a wild year in 2020. From zero running back a few years ago, a doomed position from the moment it was suggested, to 2020 where everyone takes running backs at the top of the draft. As hoped for, I was able to grab James Conner. The last two years, per 16 games played, he’s averaged 1,520 scrimmage yards, 62 receptions and 14 touchdowns. Now I’ll focus on wideout.

ROUND 3: I have no shares of Kenny Golladay yet. Problem solved. A dynamic force who should flirt with 1,300 yards and double-digit scores with a healthy season from Stafford. Golladay was one off the league lead in 25-yard catches and he was top-5 in the league in air-yards in 2019 (even with Stafford only playing half the year). This will be his best statistical season. Still thinking WR/TE with next two picks, but if Akers falls maybe I’ll switch it up.

ROUND 4: Akers almost fell. Alas, he didn’t. I had four targets – Cooper/Sutton and Ertz/Andrews left. Being that both tight ends were still there, and feeling confident that Tim wasn’t taking two at the turn right after me, I went to the wideout spot (I think being in the #2 hole really allows you some freedom to interpret that #1 opponent as you can get into their head in football way easier than you can in baseball). Courtland Sutton led football with 42.9 percent of his team’s air yards thrown his way, and I believe he is not just a good, but an excellent WR2 in a PPR setup. Pumped to have him on the squad.

ROUND 5: Zach Ertz is my guy. For more on why, see this Draft Battle where I chose him over Mr. Andrews. Based upon how I hoped the draft would play out, this is an ideal first five rounds, and that never really happens. Like, never.

ROUND 6: Zack Moss was the selection, with the thought that I would either go Dobbins or a QB next round. D. Singletary is having some ball control issues, everyone with the Bills seems to love Moss, and it is clear that Moss will have a significant role, even with Singletary potentially the lead back, to start the year. Moss will be the goaline hammer as well, and Josh Allen, for that that is worth, is at least saying he wants to run less this season. All of that speaks very well to the fantasy prospects of Moss.

ROUND 7: I’m sitting here in the seventh, and I know that QBs are going to start to go off the board. As much as I love, and could totally justify, going with Wilson/Watson here, I’m also a believer that stable quarterback play can be found later in a draft, certainly in a room where folks delay on taking their signal caller. Therefore, I went back to the rookie well and grabbed J.K. Dobbins. I’m going youth/talent/setup here. Yes, Mark Ingram and Gus Edwards are there, and yes those are significant hurdles, but Dobbins continues to draw rave reviews from everyone, and we all know just how flippin’ dominant the Ravens’ offense is on the ground. I’ll be patient, and hope this pick hits.

ROUND 8: What a shock. Look at all the quarterbacks that went between my picks (four in the 7th Round and one in the 10th round). My wideouts are a bit thin since I went with Wentz, so it is time to strike (I’ll hope one of the four QBs I really want is left in Round 10). Emmanuel Sanders will give Drew Brees his first reliable second wideout in years. Sanders will go 4-60-0.4 a week, or something along those lines as he will give defenses something to worry about past M. Thomas.

ROUND 9: Am I comfortable with Sanders as my WR3? Yes. Do I feel like I scored a winning touchdown? No. So instead of taking a signal caller, I went with another wideout. Darius Slayton had some huge games last season, and there is some risky of the hit or miss nature of his game last season, but he scores touchdowns, is an ascending player and he undeniably has a great rapport with D. Jones. Really like that 14.3 aDOT as well for Slayton.

ROUND 10: Allen Lazard was the choice over John Brown. Why? Ultimately it boiled down to quarterback play. Aaron Rodgers is so much better as a passer than Josh Allen, that I will take the somewhat less exciting profile of Lazard over Brown, while also factoring in what the presence of Diggs could do to the target share of Brown (note, it will not go up from last season).

ROUND 11: I went with Matt Ryan. Could I have waited until Round 12 to grab a QB? Certainly. At this point Brees, Stafford and Rodgers were the three quarterbacks I wanted that were left if I passed on Ryan. Would one of the Four make it back? Certainly possible. Maybe even likely. That said, Ryan is incredibly consistent as a passer, the OC/HC are back, and there are tons of weapons to use. As safety pick and one that should lead to 4,400 yards and 28 touchdowns if he’s just his “normal” self.

ROUND 12: Boston Scott, Tony Pollard and Joshua Kelley. Those were the three I was eyeballing. Only Tony Pollard was left, and now he is mine. If you draft Ezekiel Elliott and don’t make taking Pollard a priority, you are making a mistake. If I took Elliott, I would be grabbing Pollard, likely in the 9-10th Round zone, as Pollard has a league winning position in hand if he takes over the backfield.

ROUND 13: This one was tough. I need another wideout. At the same time, I really want/need to spend a roster spot on Snell to cover for Conner. But Drew Brees is just sitting there. I know QB is deep. I know that quarterbacks don’t bring a huge return if you deal them. I know that I don’t need or usually plan on taking a second quarterback. But when HOFamer Drew Brees is sitting there in the 13th Round it is time to price enforce. Its also possible to take Brees here as a second QB since I have a lockdown tight end in Ertz and don’t really need to spend draft capitol to add another end, so there’s that.

ROUND 14: I went Patriots here, because you never bet against Bill Belichick. I could have waited a round, but two reasons I did not. (1) Tim wasn’t going to take Snell on the turn. (2) Tim is a big Patriots fan, and I bet he would have taken them with one of his two picks at the turn (he said he wouldn’t have in the chat room after the pick).

ROUND 15: Benny Snell is the handcuff I need for Conner, just in case the oft injured one were to miss time again in 2020, and as predicted, Tim had no interest in him. I wouldn’t expect Snell to touch the ball 20 times if Conner does down, but 12-14 touches with five targets a week would play, would it not?

ROUND 16: Jake Elliott rounds out the roster.

Speaking of the roster, here it is in one spot.

Two of my top 15 RBs. Elite young options in Moss/Dobbins/Pollard and Snell for a handcuff. This is a potentially dynamic group.

My wideouts are my “weak” spot. I think it’s relative though. In my book I’ve got two top-15 wideouts. The third spot could end up being some mixing and matching with Sanders/Slayton/Lazard, but even so, that spot should still outperform what many toss out there at tight end each week.

An elite tight end to make up for a moderate WR3 group on draft day.

Does anyone care about kickers and defenses?