Los Angeles Rams WR Cooper Kupp was good for eight receptions and a game-high 127 yards with a touchdown on nine targets in Week 9 against the Tampa Bay Buccaneers. It was his fifth 100-yard game in eight outings, and fourth game hitting the century mark with at least one score in the same contest. 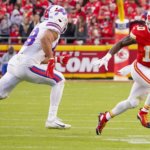