Scroll right to the part of the MLB Weekly Preview you need in just one click!
Below, you will find an interactive table of contents. Simply click on the section of the article you wanna read and boom.. presto… alakazam.

6.5 months.. 26 weeks.. 182 days.. 4,368 hours… it all comes down to this. Weeks of hard work come to the apex. In roto leagues, the aim is to maintain our strong categories while making any possible last-ditch advancements in those we minimally trail. For head-to-head and points leagues, some may complain it is idiotic to have a full season of fantasy baseball come down to scrapheap relics of what our teams may have looked like a mere few weeks ago. But that is the definition of a fantasy baseball champion. He/she takes lemons, makes lemonade and douses the competition with clever play after clever play. I argue, H2H formats will keep fantasy baseball alive.

Here are some strategies for baseball’s final week:

*UPDATE: Marte was diagnosed with a stress reaction in his back and will be shut down for the rest of the season

Have more award winners or disagree with these? Drop a line in our VIP Chat Room or hit me up on Twitter, @Rob_Povia.

Austin Riley, in all probability, will bat DH for the Braves when they visit Kansas City for two games in the final week. Riley hit his first home run since August 2nd on 9/19, driving a 94mph fastball on the outer black for an oppo taco. His bat seems quick again and full of that juice we saw in May and the early part of June. However, Atlanta only plays five games in the final week, rendering Riley as a bench tool for daily leagues. I can see him making noise in the playoffs for Atlanta. Franmil Reyes will lose out on three games worth of ABs, as he sat all three games in the Tribe’s most recent National League series. Just another example of how the MLB commissioner’s office hates us fantasy diehards.

If I said it once in the MLB Weekly Preview, I’ve said it a hundred times… interleague schedules need to be examined and rectified.

IN ORDER OF PREFERENCE – You may notice a few top names from playoff-positioned teams omitted from my list. For example, Max Scherzer is scheduled to pitch the 2nd game of a doubleheader on 9/24, which would put him on track to start the last day of the season. The only way he sees the mound that day is if Washington needs to win Game 162 to make the playoffs. The NL Wild Card is coming down to the wire, but smart money says the Nats make the playoffs and Scherzer’s second start comes in the one-game showdown.

Besides ALL of the names already listed, here are a few more fantasy studs. I will update the MLB Weekly Preview early in the week.

Jean Segura (hamstring) was pulled on 9/19 in the sixth inning after coming up lame while busting out an infield RBI single. Originally diagnosed as a cramp, Segura was sent for more tests, which did not reveal anything more serious. After being in the original lineup the next night, he was a late scratch due to a new ankle injury. You can’t make this shit up… ’tis the season!

Gleyber Torres legs buckled underneath him as he fielded Vladimir Guerrero Jr.’s fourth-inning infield hit in New York’s 4-3 loss to the Blue Jays. Torres remained in the game until the seventh inning, when he was removed after reporting what manager Aaron Boone described as “weakness in his lower legs.” Seems more like 140 games played talking than an actual injury, but stay tuned.

After going through a dead arm period, Brad Hand “looked himself” in a bullpen session and has been deemed fit to deploy by manager Terry Francona. All tests have come back clean, and the issue was attributed to a gradually lower arm angle as the season progressed. After last pitching on 9/8, I wouldn’t expect save chances right away. Also, this could be a decoy for the Tribe’s competition, which wouldn’t be beyond master strategist Francona. In either event, I’m holding Hand – see what I did there – since any stats/points from RP slots are valuable at this crucial time. Especially if your league counts Holds or SV+HD, you should hold onto Hand as well till the very end.

→ Michael Wacha, RH STL (@ARI) – Wacha, Wacha, Wacha! Floating between the starting rotation and long relief, Wacha’s monotone season was far from what he had hoped. He was looking to make a serious rebound from a shortened 2018 season. The mark was largely missed, however, his last three games have shown the talent is still held within (13 IP, 3 ER). Going back a bit further, his best start of the season came five starts ago against the Reds (7 IP, 3 H, 2 ER, 2:7 BB:K). So what changed?

Wacha’s cutter has always been his bread and butter. A real worm killer, the pitch generates an extreme number of ground balls. He lost the feel for a while, but it is back with a vengeance (28 ground balls in those aforementioned three games; eight against Cincinnati). Wacha’s strikeout totals tend to waiver, but in his higher K games, his circle change gets batters out in front – the change of pace averages 86mph in comparison to his fastball topping out at 93-94mph. Anytime a pitcher has a 7-10mph difference between the two, success is soon to follow.

Arizona has scored 29 runs over the last seven days (16th – MLB) and have a slash line of .223/.294/.363/.657. Despite a nine-run onslaught the other night, it appears the D-backs are packing it in for the winter. Falling further out of Wild Card contention only means less motivation these final few days. Wacha and the Cards have plenty to play for this week. Did I say his best start of the season came five starts ago? What I meant to say is this game will be his season’s masterpiece, and I have a funny feeling something special may happen on this night… get him in your lineup where available (Yahoo! – 18% owned; ESPN – 12%; NFBC – 56%). 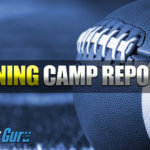