Atlanta Falcons RB Cordarrelle Patterson had 10 runs for 52 yards in Week 11 against the Chicago Bears, and he added two grabs for seven yards on his two targets. He did lose a fumble, but also had a 103-yard kickoff return for touchdown, the ninth of his career, which is now an NFL record. 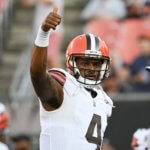