Cleveland Browns RB Nick Chubb rushed 17 times for 134 yards and two touchdowns in Week 5 against the Los Angeles Chargers, and he did not have a catch on his lone target. It was Chubb’s third straight 100-yard game, fourth in five games, and his fourth straight outing with a touchdown, too. 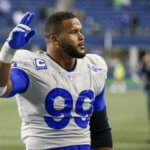